andBeyond Sossusvlei Desert Lodge: the magic of the stars

“I have to, have to, have to go to the andBeyond Sossusvlei Desert Lodge, even if it just for one night, to see the starry night in one of only three Gold rated Dark Sky Reserves in the world”, I insisted to my travel companion. Ever since I came across the concept of a dark sky reserve I became fascinated with the idea of seeing more stars that can be painted or imagined. In all that black void that our eyes see there are actually millions of stars, eclipsed by the light pollution.

There are today several “Dark Sky Places” where lighting is better than usual and more stars can be seen with the naked eye. To go one step beyond that, there are Dark Sky Reserves that are made of a core where light pollution is minimal and visibility even better and where legislation and rules have been enacted to protect it from light pollution. Of those, only three in the world are designated Gold and one of them is in the NamibRand Nature Reserve, in Namibia, where andBeyond Sossosvlei Desert Lodge is located. A picture of Africa at night generated by NASA shows that the continent is mostly a dark spot with minimum night lights. Namibia, being the second least populated country in the world after Mongolia, is a clear case of dark nights.

Flying on a Cessna in Namibia

Maintaining Gold Dark Sky Reserve status means making a conscious decision to reduce light pollution. To ensure that, Sossusvlei Desert Lodge’s lights are energy saver red bulbs, which assist with night vision and dark adaption for guests. All outside lights have been removed and there are no lights of any sort facing the observatory or the telescope. At dinner, on the tables set in the open, only solar lamps and candles are used. I can barely see what I am eating, but it tastes nice, and the beauty of the surrounding darkness is well worth it. 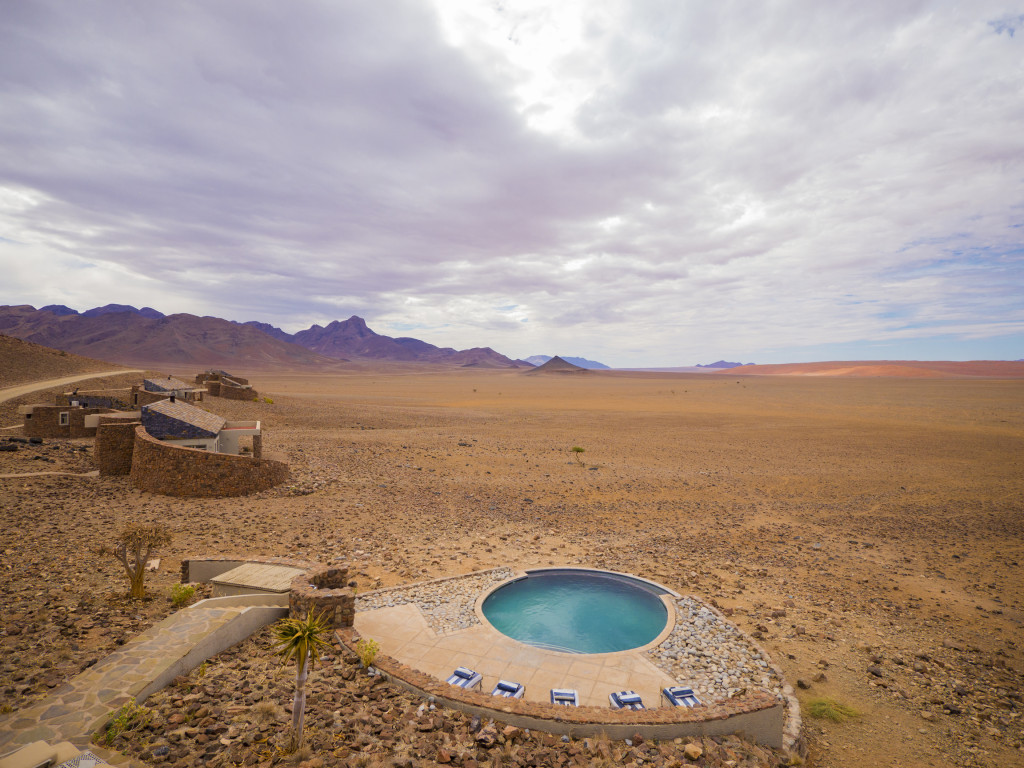 “I am not sure the sky will be clear enough tonight but, if it is, feel free to join me at the Observatory from 9,30pm onwards”, excitedly invited us the resident astronomer while we were enjoying our pre-safari tea time at the lodge’s lounge area. “We surely will,” I answered, eagerly to see the famous starry night, “we booked only for this!”, I added just to make sure he was clear about our intentions. The oryxes drinking from the swimming pool, a few meters away from lunch, the zebras and springbok grazing a few meters back and the incredible landscapes of the Namib Naukluft Park and the Sossusvlei Dunes were just a bonus, I had come to count stars.

But as soon as I entered the lodge, the stars suddenly became the add-on. I had succumbed to the magic of the desert, the ethereal landscapes of the shifting sand and the millennial old mountains. Paolo’s voice helped. The lodge’s Manager surely had an air of happiness and relaxation as if he had discovered an oasis in the endless sand and was weary of speaking too loud, lest the tourists find out.

Sossusvlei Desert Lodge was indeed a little oasis of luxury in some of the world’s harshest and most incredible places. Sipping a cold lemonade on the plush sunken sofas we were under the spell of the vast and ancient Namibian outcrops. The rest of the guests were chilling, literally absorbed by the view and the comfortable sofas, all in silence, simply taking it all in. Everyone was in awe, and keeping it to themselves. 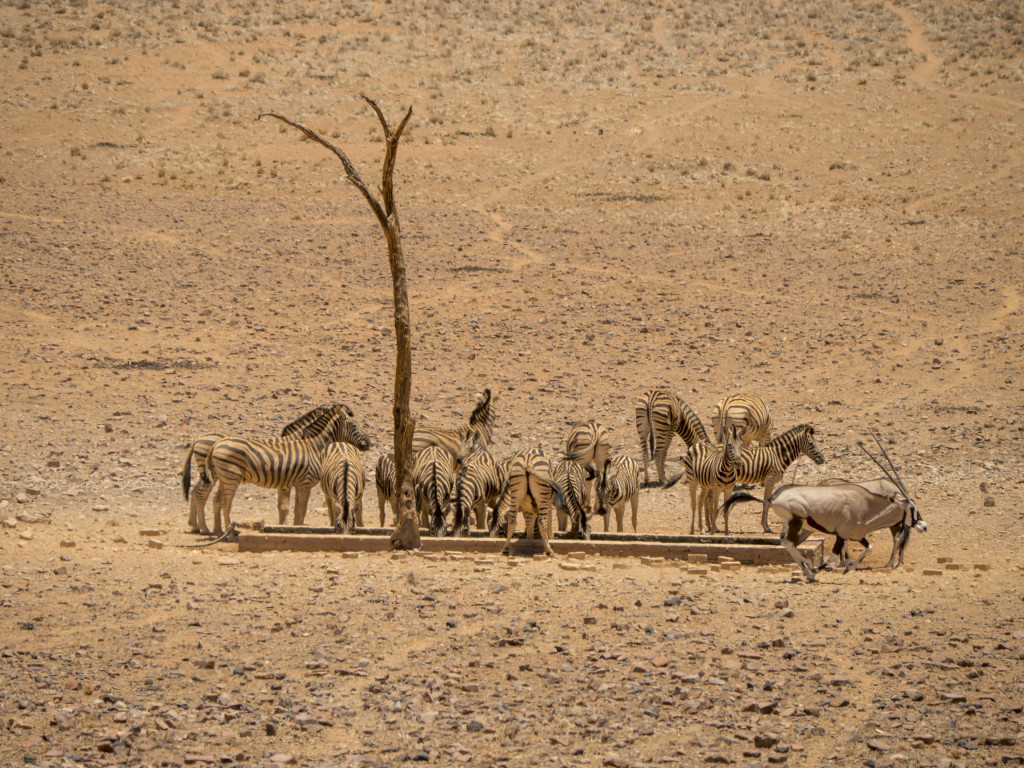 AndBeyond Sossusvlei Desert Lodge is made of only ten villas, all of them built entirely of native materials. The same stone that made up the shooting mountains was used on the outer walls, fully blending in. You could fly over the lodge and not see it was it not for the baby blue colored swimming pool that so easily attracted the wildlife.

Bathroom with a view

Inside, the villas were split-level rooms with a fireplace for the chilly winter nights and a bed with a skylight to stare at the endless stars. The bathroom had an indoor and outdoor shower both with wraparound windows opening onto the otherworldly landscapes. The villas were fabulous, in a rustic yet stylish way, and the feeling of remoteness and isolation was maximum. There were no other guests, no other tourists, no other cars in sight, just the silence of the wind and the daily procession of wildlife to the waterhole.

An afternoon scenic drive took us around the area in search of wildlife and plants that could outlive the arid conditions. The heroes of the desert were easily spotted having nowhere to hide. Rarely did we find a bush or a tree large enough to hide an animal. Some of the acacia trees bore large bird nests heavy enough to collapse the trunk.

We looked for springbok, zebra, oryx and some of the typical desert birds. We looked for the tales in the little details. A squirrel chasing a small fruit, an eagle flying low, and the famous fairy circles, an interesting phenomenon that could be seen across Namibia and which consisted of an empty circle surrounded by plants. We dreamed of UFO, aliens and termites to justify the empty circles and heard the stories that our guide George wanted to share with us as we saw the sun getting lower and lower.

How to dine at andBeyond Sossusvlei Desert Lodge

As I prepared to miss its rays behind the mountains, George stopped behind a mountain and got out the table at the front of the Land Rover to prepare the drinks and snacks. Gin and tonic, which always tastes much better in the bush, and some biltong dried meat, which I only appreciate on safari. And there and then, the sky turned orange, blood red and then purple before it revealed the stars for which our trip was planned. But the best part of a day in the bush was yet to start. After sunset came the dinner under the stars and the stalking of far away galaxies.

Sunset in the NamibRand Reserve

Back at the lodge, the evening had settled and, 24h after leaving Frankfurt, I was in the middle of nowhere surrounded only by the most beautifully desolate of landscapes and the light of a solar lamp. We were served exotic game meats and South African wines while we marveled at the bright full moon and the peace of the desert.

And then we joined the resident astronomer for a lecture on the mighty sky, the sky our ancestors, before the time of industrialization, street lighting and mobile phones, saw above us, not the one we see today. 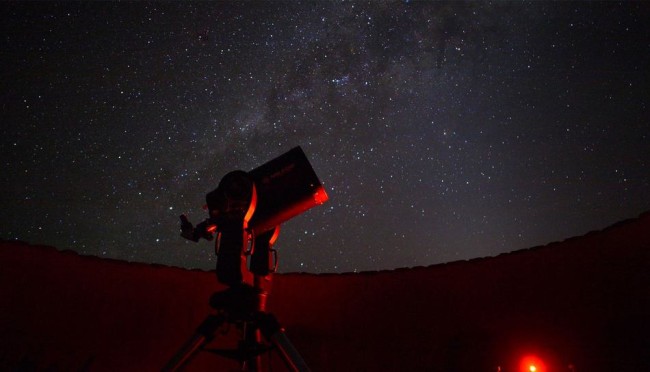 I had never seen so many stars before. Looking up, even on a cloudy evening, I could see a true blanket of stars, not a few constellations here and there but a continuum of stars. Suddenly, all the stars that lit the sky back home had thousands of neighbors. I realized the sky is not black but covered in millions of shinny spots. With the expert guidance of the resident astronomer, we ventured out into the brightness of the night to discover planetary nebulae and galaxies several million light years away.

Through the lens of the 12-inch Meade LX200 telescope they looked clear and near. It was easy to get lost in the countless galaxies and constellations and spend the entire night mesmerized by the worlds that exist beyond our atmosphere. With experts and fanatics, the astronomer could spend entire evenings peering through the telescope discovering star dust, stars that died but whose explosion we haven’t seen yet, and the creation of new ones. “If you had a Canon we could connect the camera to the telescope and you could photograph the sky”, he teased me, as if he was promising ice cream to a child.

During the winter Southern Hemisphere months (April to September) the skies are clearest and one can see the full splendor of the Milky Way with star-clusters, galaxies and the southern constellations of The Southern Cross and Centaurus clearly visible. In the summer, when I visited, one could see a globular cluster known as 47 Tucanae – a several-billion-year-old cluster of over a million stars.

As we were getting lost in the mesmerizing beauty of the sparkling night sky, lightning struck and a storms started to close in on the lodge, interrupting our star gazing session. In a desert which receives less than cm of rainfall a year, this did nothing but confirm that we were having a once in a lifetime experience.

Why you should visit Djibouti – the country...

What to pack for a safari – expert...

Travel guide and things to do in Somaliland

Tourism in Zanzibar, from the slave trade to...

Things to do in Cape Town as recommended...

The best hotels in Kigali and Rwanda