How Slow Travel in Tuscany changed my travel style

This post is part of a series on slow travel in Tuscany which I had the incredible fortune of enjoying with the wonderful couple behind Km Zero Tours. Tuscany is a very popular destination in Europe and often included in culture-centric itineraries through Europe that stop in Florence, about an hour drive away.

What is Slow travel

Slow travel is a movement started off in Italy, particularly in Rome, as a protesting movement on the back off Starbucks’s first coffee store opening in the 80s.

Although there is no fixed definition, Slow travel advocates for experiencing a destination and a place like a local. It encourages travelers to take it slowly, to rent an apartment, to go do the groceries at the local stores, to understand where the food they are eating comes from, the produce who makes it, the farmer who grows it, and to basically take it all in as if one was living there.

To illustrate further. The opposite of Slow Travel is the usual check-list ticking type of travel that I am guilty off on occasion, where you just fly from place to place, tick items off a list, have no understanding of what is behind what you are seeing and simply want to cover as much ground as possible. Slow Travel is the antithesis of that.

Why is the region so fascinating? 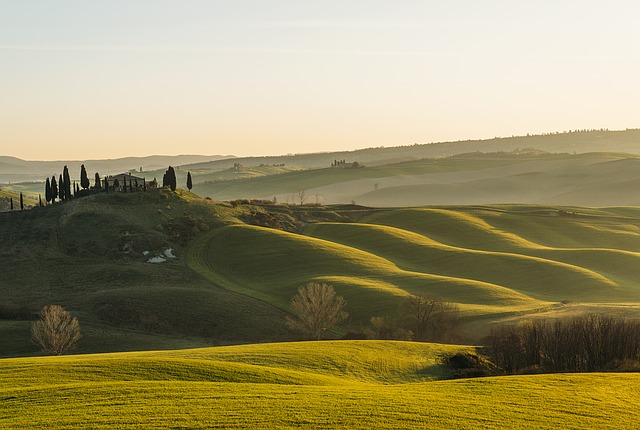 Tuscany’s 21st century renaissance came into being through the images and the fairy tales of Hollywood movies such as “Eat, Pray, Love” or “Under the Tuscan Sun” and now it is impossible to plan an itinerary in Italy and not include the region in it.

Hollywood movies aside, Tuscany’s cultural importance dates back to the 16th century as the birthplace of the Italian Renaissance movement. It is home to famous museums like the Uffizi, built by the wealthy Medici family, and there are 6 sites that have been included in the UNESCO protected heritage list including the historical centers of Siena, Pienza and Florence, the city with the highest concentration of Renaissance art and architecture in the world. Both Leonardo da Vinci and Michelangelo lived in Tuscany as did important authors such as Dante Alighieri, Petrarch or Niccolò Machiavelli who gave the Tuscan dialect the substance to become the basis for the modern day Italian language.

The area is also known for its food. There are four wine appellations, Chianti, Vino Nobile di Montepulciano, Morellino di Scansano and Brunello di Montalcino, dozens of high quality olive groves and cheese producers and a cow breed that gives the region is famous (and divine) Florentine steak.

Its iconic undulating green hills with large country houses surrounded by vineyards, plains and olive groves are the result of ancient defensive practices as the area was the center of many wars and disputes between Siena and Florence. Geographically, Tuscany extends from the Appalachian mountains to the sea but fertile hills still occupy 60% of its territory.

With such a rich heritage, culture and cuisine, it is no wonder that Tuscany is a magnet for foodies, wine connoisseurs and nature lovers. But to grasp the realities behind the idyllic tourist traps, locals advocate for Slow travel because to truly understand how Tuscany works, you have to immerse yourself in the culture, one that is sure to give anyone an unforgettable time. Else, ask Sarah how much she enjoyed her cooking class in Spannocchia Farm! The above also make Tuscany a great destination for families.

I spent a few days in Tuscany with Arianna and Alessio from Km Zero Tours, an adventure they started a few years ago to show people their beautiful part of the world thought Slow Travel tours of Tuscany. After a few days enjoying the slow life, spending half day with producers, having lunches or dinners at their homes and learning about real life in Tuscany I realised that my travel style, sometimes, misses our on the beauty of simply enjoying a place without an agenda.

After realising that this was not the best ways to understand or learn about a place, I went the other way. I had no plan whatsoever and I even showed up at countries without bookings and without knowing much about the place. I spent two months in the Pacific one of which I decided my plans as I opened my eyes in the morning. I went to airports without bookings, I decided on destinations based on the travel guides I could find in remote bookstores which only sold very old book copies that were tremendously outdated.

Today, I plan and read about a place before going, I try to see what would be the part I would enjoy the most and I make bookings for the essential places I don’t want to miss out on or which I know are very popular. But I leave plenty of time for serendipity. I try to get lost, I aim to discover places that are hidden, I talk to the locals, I seek the stories that have never been told. And I often travel alone. Not that traveling alone is incompatible with Slow or fast travel, but by being a solo woman, I am more likely to attract invitations to meet locals, to join their tables, to interact. People are not threatened by women but instead feel compassion, curiosity for traveling solo and I have found, in my experience, that the vulnerability invites more interaction. It is also true that being a travel blogger, my travel life is also determined and often manipulated by the needs to document every move, but I always have the freedom to choose what part of my life I leave in my memories only vis-a-vis what part I decide to let the world share in with me.

Me and 10 years worth of boarding passes

If one day I no longer have the limitations and demands of a full time job that does not give me enough time to truly travel slow, I am sure my travel planning will not have a check-list. The Slow Travel trip to Tuscany sure changed my view on travel.

Slow travel in Tuscany: Hand made biodynamic wines in Chianti

The quaint and Godfather-famous village of Savoca

The Godfather filming locations in Sicily

PERSPECTIVE - One of the realisations of the curre

AT A CROSSROADS - The travel industry is certainly

WHAT ARE YOU DOING TO STAY POSITIVE? - I usually a

A SCULPTURE OR A BRIDGE? . This is a bridge in the

CHANGE OF PERSPECTIVE - It's funny how it all look

THE GRAND CANYON? - You would never guess where th

Your window into luxury and out of the ordinary destinations