How Drukpa Kunley convinced Bhutan to worship the phallus

Buddhism first arrived in Bhutan in the 8th century. It then began to spread over the next few centuries. In the 15th century, a Tibetan monk named Drukpa Kunley arrived and helped to spread the religion even further. He has remained one of Bhutan’s most revered Buddhist masters to date.

Although he simplified religious texts for the laypeople of his adopted country, Drukpa Kunley’s claim to fame goes beyond this task and is one of the most interesting facts about Bhutan. He is actually known for a more notable skill: using imagery of the phallus to subdue demons and bless the people of Bhutan.

His bizarre and unorthodox ways of teaching Buddhism earned him the nickname of Divine Madman or The Saint of 5,000 Women. He used shock, sarcasm, sex and outrageous methods to explain Buddha’s teachings to the masses. Some of his most famous performances include urinating on sacred thankhas, stripping down naked or offering his testicles to a famous Lama. He is one of very few Buddhist teachers to almost always appear in Bhutanese paintings topless.

“I have come without prejudice to help you, where can I find the best booze and most beautiful women”

Above all, he was known for using his penis to awaken unenlightened beings and subduing demons that were terrorising the locals. His phallus became so famous and powerful that it was known as The Thunderbolt of Flaming Wisdom. He always carried a wood and ivory version which is still in possession of the main Buddhist monk at his fertility temple, Chimi Lhakhang, outside of Punakha, where fertility blessings are still offered in the same way he used to give them: by hitting women on the head with the ten inch tool. It is said that women from all over the world come here in search of the child they are not able to conceive. Although I do not believe in spirits of madmen living in wooden phalluses, I couldn’t help but feeling a bit weary and cautious when in the temple, and, just in case, I made sure he did not think I was making any requests.

Chimi Lhakhang is located where Drukpa Kunley subdued a dog incarnated demon with his penis. Legend has it that the demon was terrorising the people at either side of Dochula Pass who were not able to cross it. Drukpa Kunley trapped the demon in a black chorten (Bhutanese version of a stupa) outside the temple building. His cousin built the temple in his honour later on.

There area a few phalluses on display by the temple’s altar, but it is otherwise a rather modest building, not reflecting Drukpa Kunley’s exuberance and excesses. In contrast, all the houses in the village next to the temple are painted with erect penises in incredible detail, some ejaculation, semen splashing on the facade, as if anticipating the climax at the temple uphill. The phallus is always invoked to bring fertility or prosperity and to ward off evil hence those paintings and the many more representations of the phallus hanging from houses, standing erect on rooftops or on vehicles are placed for safety.

Who was Drukpa Kunley, the Divine Madman 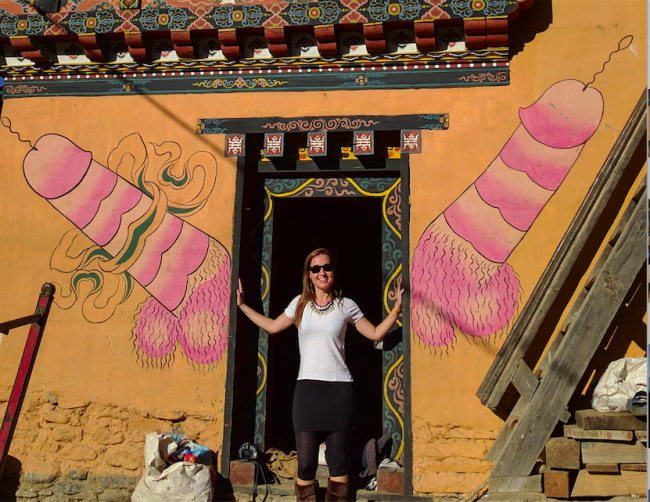 Phallus on facade next to Chimi Lhakhang

My friendly but formal guide during my nine day journey through Bhutan reminds me that Drukpa Kunley would not bless anyone who came to seek his guidance and help unless they brought a beautiful woman and a bottle of wine. Chimi Lhakhang is certainly filled with the weaved portable wine bottles.

“The best chung wine lies at the bottom of the pail

And Happiness lies below the navel.”

Drukpa Kunley arrived in Bhutan in the middle of the 15th century from a lineage of Tantric masters. Disillusioned with life after his father was killed in a family disagreement, he decided to leave it all behind and turn to religion. He arrived in Bhutan to spread his unconventional ways of teaching through socially unacceptable behaviour, alcohol and sex. As a master, he was a poet and many of his teachings are immortalised in his own words.

“I am happy that I am a free Yogi. So I grow more and more into my inner happiness.

I can have sex with many women, because I help them to go the path of enlightenment.

Outwardly I’m a fool and inwardly I live with a clear spiritual system.

Outwardly, I enjoy wine, women and song. And inwardly I work for the benefit of all beings.

Outwardly, I live for my pleasure and inwardly I do everything in the right moment.

Outwardly I am a ragged beggar and inwardly a blissful Buddha.”

In Bhutan, he was a wanderer and a homeless, touring the country and spreading his wisdom with acts that soon spread out across the country. He drunk, parties and had frequent sex with any woman he would find. He challenged the preconceived notions of Buddhism and tried to liberate the religion from strict rules.

Bhutan’s obsession with the phallus goes beyond Drukpa Kunley and originates in Bhutan’s Bon, or animistic, traditions that existed before religion arrived in the country. Offerings and rites in everyday life often include it as a main character and celebrations and festivals across the country and year are organised around the phallus. Children wear phalluses around their necks as amulets and they are also placed around valuable cattle neck. Phalluses are carved on scarecrows to protect the crops or hanged above doors to remind onlookers that, if harnessed, the phallus is the center of male ego and can be used to “channel productivity and creativity and not lust”.

The most fascinating way to read more about the country’s obsession with this human part, with or without Drukpa Kunley, is through the book by Karma Choden “Phallus, Crazy wisdom from Bhutan” which documents several instances of phalluses found across the country and the stories behind them. In the book, the author narrates tales and traditions from some of the most remote parts of the country. Offerings and rites with singing and dancing around wooden phalluses or with phalluses carved on dancers’ masks are a common tradition. Phalluses are used to invoke fertility, to protect from evil, from malicious gossip or to bring prosperity and wealth.

Throughout the country, if you pay attention to the smallest details, you will be able to spot phalluses on poles, house rooftops, tree structures, offerings and even in temples, where butter lamps or offering cakes can be shaped in the form of a phallus.

Perhaps the most obvious ones are the phalluses painted on house facades or pointing to the four cardinal points on rooftops. When a house is completed, a ceremony entailing 5 red phalluses is carried out by the woman of the house and her relatives. Positioned on top of the phalluses in a basket, she is raised to the rooftop to position the phalluses in each direction. The fifth one goes in the house’s altar room. The ones on the rooftop are meant to protect the family, bring prosperity, wealth, power, peace and wisdom.

“Size doesn’t matter. A phallus is all you need”

And the largest phallus in the country? According to the book, this is the one in Tharpaling Temple, in Bumthang, which is made of stone and cement and measures seven feet. But if you want your small souvenir sized amulet, you can buy it at any shop in Paro.

If you are looking for a more passive storytelling version of the Phallus book, a local Director and a Film Maker are in the process of raising funds to create a movie about Bhutan’s obsession with the phallus. Red Phallus will be tentatively filmed in 2017 in Bhutan.

Surprising facts about Bhutan – Land of the...

Guide to Bhutan: Everything you need to know...

Getting lost in Bagan, journey to the beautiful...

9 day journey through Bhutan with Amankora